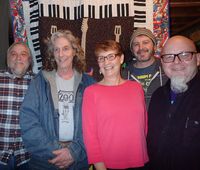 The DooWahs will be celebrating the 200th anniversary of French physicist Augustin Fresnel's submission of a "supplement" (signed four days earlier), which, among other things, reports that optical rotation can be imitated by depolarizing the light with a Fresnel rhomb (in the form of coupled prisms), then passing it through an ordinary birefringent lamina, then repolarizing it with a second Fresnel rhomb at 90° to the first. The first human to explain this satisfactorily must sing "Louie, Louie" with the band. I guess we'd better learn "Louie, Louie."
Anywho, we've got a bunch of new songs prepared for your delectation, including Bobby Charles' "Save Me Jesus," Randy Newman's "Political Science," World Party's "Ship Of Fools," and, if necessary, Richard Berry's "Louie, Louie." Please come join us at Poggie Tavern, 4717 California Ave SW, for a festive Friday evening of dancing, drinking, darts, pool and pull tabs. We'll begin the music at 9PM and go until the Fresnel rhombs come home! Say the magic word (birefringent) and you can buy the band a beer!